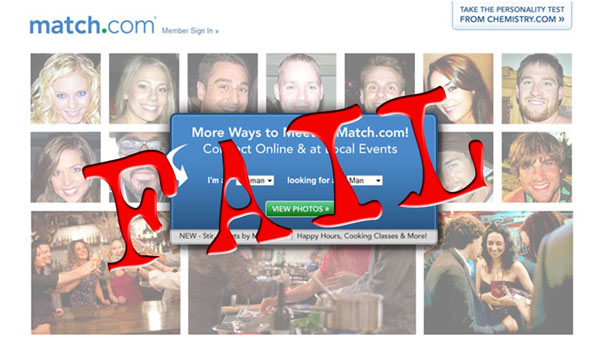 On April, 15 2011, found originally on yahoo news but you can read the gist of it here

We need to talk about responsibility. Where does it begin and where does it end? It's important to note that any time lawsuits are brought public side you can almost guarantee there will be new statutes (laws) to follow. Read this article for yourself and see if you don't reach the same conclusion I came to.

To make a long story short she is suing Match.com because a man she decided to meet sexually assaulted her.

This is outrageous! How is Match.com liable for all of this?

Although Im no fan of paid dating sites, Match.com shouldn't be held responsible for the misconduct of their users.

So this woman decides to meet up with a guy from Match.com and go on a couple of dates.

Somewhere along the lines things he got fresh and made an unwelcome advance.

What we don't have is the setting in which this took place, time of day, what she was wearing, mood of the individuals, ya know the basic when, where, what, and how?

In any case, a lawsuit's been presented where she's playing the victim claiming damages.

Common sense should've kicked in but perhaps this woman was frozen in fear. We don't know since we were not there.

A question comes to mind, why should Match.com be liable? Where does she get off making others responsible for her error in judgement?

As the article suggests, "The civil suit filed Wednesday demands that Match.com screen its members for sexual predators. The lawsuit asks for a temporary injunction barring the site from signing up more members until Webb's client's demands are met."

This is comical to say the least. Why? Because she is the one who made the decision to meet this guy and allow things to progress as far as they did. What this story shows is she defered her judgement to a third party and common sense would suggest this is something we should never EVER do.

Match.com like many dating sites cannot certify each and every user of their site is not some creeper. That is left up to you the user to address before an encounter.

She represents a minority of women who can be an invitation to trouble.

She's the parallel to that girl in the club who sluts herself out dancing on poles, table tops, kissing other females and prancing about. She's a con artist and someone you should be very cautious of.

We believe dating should be fun and most of all free of trouble. This story is just one of many that presents some of the unfortunate hassles that go with the online territory.

She may be one dumb woman but then there are many others like her so be careful meeting up with and engage wisely. How do you feel about this?