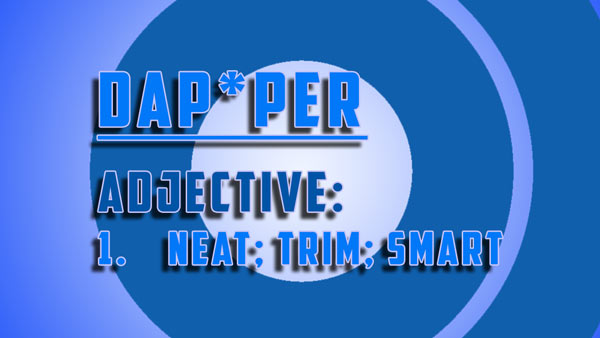 These days people put a great deal of emphasis on what type of person they are being. They've been labeled by friends and family with descriptions like 'Nice' Guy, a 'Funny' Man, a 'Wise' Guy etc etc. What people perceive us to be is important to us from a social acceptance stand point.

When it comes to defining ourselves and writing out a personal profile message, what we put out for others to read gives them an impression of us. Although this is just a slice of the total picture, it can be the make or break opener that makes women want to get to know us better.

If you browse profiles often enough you will read repeatedly where women are looking for a 'Nice' Guy. Is that what she's really looking for?

Do you really want to be a 'Nice' Guy or is there a better adjective to use when describing the kind of guy you are? There's lots of adjectives to choose from to define who you are or who you want others to think you are.

Let's take a look at the word 'Nice' for a second.

To answer this question, we have to look no further than the behavior of women and all those so called 'Nice' guy's who've been cast aside for a 'Bad' boy.

It doesn't make sense at first until we dig deeper and get to the root of the word. 'Nice' appears to be a nice word on the surface until we dig further into it's etymological roots.

Word History Five hundred years ago, when nice was first used in English, it meant "foolish or stupid." This is not as surprising as it may seem, since it came through early French from the Latin nescius, meaning "ignorant." By the 16th century, the sense of being "very particular" or "finicky" had developed. In the 19th century, nice came to mean "pleasant or agreeable" and then "respectable," a sense quite unlike its original meaning.

That tells us all we need to know about the word itself. It's important to keep in mind that many of the word(s) commonly in use today have entirely different meanings than that which you thought to be the true definition.

We point this out to you to pose two questions. When you tell a woman or write in your personal ad that you're a nice guy could you secretly be broadcasting that you're foolish and stupid? Is that what you want women to think of you as? These are negatives and who would want to be considered foolish or stupid?

This is something to give some thought to. We all want to project the very best image in the word and we do that through the use of adjectives. Perhaps there are more appropriate adjectives to use besides 'Nice' like 'Kind' for instance.

Kind2, a. Of gentle or benevolent nature; friendly in ones conduct to (person &c); (archaic) affectionate; k-hearted, having a k. heart.

The etymology of kind traces back to kin or generation.

How about one more just for shits and giggles? Cowboy anyone? Women always ask where their Cowboy is at? Well lets break the two apart since it's a compound word.

Cow n. A fully grown female animal of a domesticated breed of ox, used as a source of milk or beef.

Cow·boy n. A man, typically one on horseback, who herds and tends cattle, esp. in the western US and as represented in westerns and novels.

But wait that makes no sense!?

Actually for the example, it does. The overal point is to be mindful of the adjectives you use to describe yourself or you allow others to describe you by.

Sometimes you're called things with good intention but you should always want to live up to the image that's authentic to you, not projected on you.

So now you have a clue of why nice guys finish last, not all the time, but in the broader sense of the word they're not as appealing as the guy who's living up to being the bad boy. How do people describe you? Which adjectives do you like to use to describe youself? Leave a comment below!