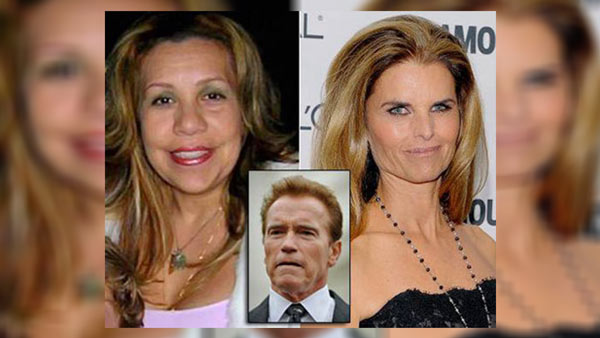 I'll be back - The Terminator

When you hear that famous line, who comes to mind? You guessed it, Ahnold!

The media went into a frenzy as new details emerge about how much of a dog The Terminator's been. From movie star to golden state Governor, Arnold has successfully maintained a wholesome family man appearance but now that's been tarnished as he now holds the title of cuckolder.

While the story may not come as much of a surprise, how it was kept quiet for so long is.

Moving along, lets get at an angle that's not having light shed on it by the media. The man who was cuckolded and duped into rearing a child that was not genetically his own.

God only knows what happened! Let’s suppose for a minute it was after midnight and Terminator went downstairs for a late night snack, he found a snack alright, a pink taco snack to be exact.

Whatever the case may be, Arnold took the bait and slept with the wife of another man planting his seed in the process. In doggy dog world that's like marking your territory.

Arnold kept this in the dark and the estranged husband of the housekeeper said he learned last week he was not the boy’s biological father.

Does Arnold deserve Player Hater of the year award?

This Player Hater’s Ball skit comes to mind, excuse the quality of the video as the person recording it sounded like they were snorting a line of coke or something.

Now let’s turn the attention to the housekeeper. No matter which way you slice the pie, all can agree she did what a dirty ass ho' does. Not only did she not refuse the governor, she conspired with him to keep the child a secret. This situation would have been different if Arnold and the housekeeper were both single.

So that makes them two peas in a pod, both are betrayers.

This is alarming and there should be sympathy for Rogelio, because he was duped into assuming responsibility for a child that was not his.

How would you feel if your woman tricked you?

Imagine for a minute, you found out the woman you loved two-timed ya, got pregnant, and made you think the child she was carrying was yours while pretending to love you?

Imagine that thought for a second and be honest with yourself about what feeling that arouses in you?

He had no knowledge or way of knowing, which would suggest Mildred’s love was based on a lie. That means the whole relationship was based on fraud to begin with!

There is not much information about Rogelio’s where-abouts during the whole affair. We can only go off of the few known facts that exist and attempt to piece together the puzzle.

A factoid here is the love child secret that was kept hidden for 14 years. That’s 14 years of Rogelio’s life that he’ll never be able to get back plus, utter public humiliation and shame to go along with it.

Giving the President a blow job made Monica Lewinski famous, being cuckolded by The Governator doesn't work the same way.

There are plenty of women to pick and choose from, and what this story tells us is that women are dogs too. It’s recommended that you be careful who you give your love away too should you decide to give it away to anyone.

This is happening every where, every single day!

Women have a history of doing this to poor unsuspecting men which is why DNA testing to disclose authenticity before you sign a birth certificate is a great idea.

You want a DNA test to prove that the baby is of yours and of your own genetics. Women are not as innocent as they appear. They know how to play the game and when they do it's for keeps!

Look past the pretty face, ass and tits. Protect thy self at all cost, not out of fear but so you don’t end up being a bleeding wallet for someone who doesn't deserve it.

It’s easy to be blinded by love and miss things like a woman who keeps you around because you're useful and convenient. She knows you love her and she’s going to need your help rearing that other mans seed.

What's your thoughts about all this. Would you support her and or leave her behind? Leave your comment!