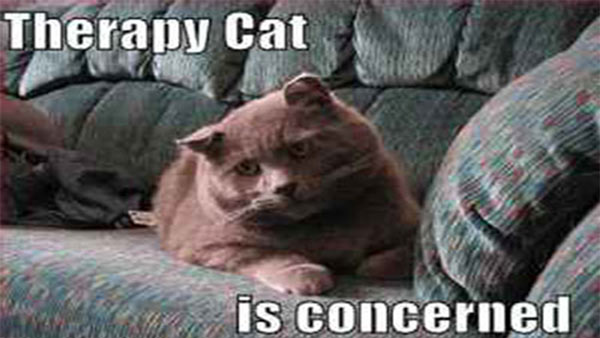 Anyone who deals with Craigslist knows about these @$!&er's. It's like they have no life. That's it! They must be non-life forms that take up space, who are they?

If You're A Flagger Reading This, Therapy Cat Is Concerned For You!

There's a nagging suspicion that your behavior is motivated by frustration, so here's a question for you... What are you aiming to achieve here?

Reports are being gathered and it appears women who post real ads are getting flagged. From the looks of it for multiple reasons. Most notably:

Now flagging fake ads, that's understandable but flagging someone's ad because you don't like them or they haven't responded is flat out retarded. What are you, 2 years old?

Knock that shit off and find something more rewarding to do. Geez!

This is douchebaggery at it's finest!

Just think if you have the time to send someone a message, wait around for a reply, and get upset for not receiving a prompt message, the very point of you getting upset is cause for concern enough for you to pay a visit to see Therapy Cat.

Female behavior may be the trigger but it's a major depletion of energy to get consumed with anger at her. Instead, understand that it's just part of the game and have enough dignity to say to yourself "Oh well, she's not the only one for me to talk to!"

Allow a woman to have the opportunity to meet someone of her choice. Who promoted you to be Craigslist Personals police. Get off that soap box and go search for someone else you can have an opportunity with.

Also, quit complaining that Craigslist lacks descent women when there is other's such as yourself, flagging ads.

Trust us, rejection is not the greatest feeling in the world. The key here is to never allow it to become the reason you never get ahead with your life.

Why Do W4M Posts Get Flagged?

"I've posted on CL twice. Once in LT dating and the other in Casual Encounters. Both were flagged immediately. They are well-written posts obviously not computer-generated. So WTF? Are there just losers who monitor and flag at will?"

The answer to this question is, YES.

the jerk off doing all the flagging,,is the one that post as jersey shore like the poster before said what he needs is a good beating...i can do it for free seems the flaggers are unhappy

well, looking to hook up, but someone is not pleased and is flagging.

Ahh, the devilishness of it all
so devious and fantastic to have all that power

Must be a very grounded person!

To Santa: I have been extra good this year, and I have just one request for my Christmas list. I would love for you and Mrs. Claus to shop carefully to find me an honest and sincere gentleman with morals and values. I am looking for the following traits for my Christmas present: A man who is available, legally and mentally; He should be at least 5'10" tall as I wear high heels often; Hopefully, he has a good job; He is sincere and honest; He is looking for something long term; and he is between the ages of 55 and 65, not married or attached.

I want to start the New Year on a good note and would love if he were delivered in a tidy, good looking package. Please Santa, just fulfill my one and only wish. If you find what I want before Christmas, you can email me his picture so I know what to expect under my tree. In exchange, he will get to meet an attractive, classy lady, approximately 5'7" with dark hair and eyes of Italian descent.

I will leave you lots to eat and drink upon receipt of my Christmas present.

Merry Christmas Santa - and be sure to deliver coal to all the flaggers.