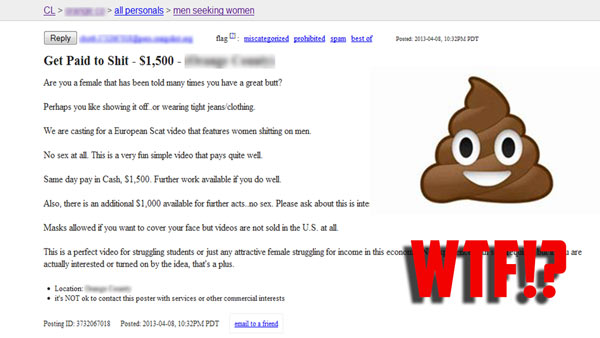 Re: Time To Settle This...(earth)the_date_decoder

LOL, you are living in a fantasy world. Confidence has nothing to do with any of it. Right off the bat, women have what they call "preferences" and there isn't any amount of confidence in the world that equates to height or income. Don't get me wrong, I'm not saying all women are like that, but I have been around long enough to know that generally speaking women in So Cal is all about status and not about love and happiness.

I went to a friend's wedding party and several women were all standing around comparing the expense of their engagement rings, and not one of them mentioned anything about how much her husband loved her, it was all about the dollar amount. Guys don't stand around and talk about how much money their wife/girlfriend makes - they complain about how much she expects him to spend on her. But the point is that women are about the almighty dollar. Regarding height,

confidence plays very little in that respect since women won't even look at a guy online unless he's at least 5'10", sometimes their minimum height requirement is 6', and they're under 5' 4" themselves. As I said, they use this "I like to feel protected" bullshit. See, women call it "preference" but when a man has his preferences they call it shallow.

You can claim all you want that it's not about this or that, but go to any dating site and you will see that you're wrong. Dating sites have these choices for minimum height, income, and education for one reason: because that's how women choose men. I saw an ad posted where the woman said she didn't care if the guy was a waiter or a CEO, yet the minimum education requirement was a Master's Degree. Another woman quoted lines from "The Notebook" and how she was "Ally seeking her Noah", yet the minimum education was a Doctorate or above, she clearly missed the point of that movie. Then there's the woman who lives with her parents and makes less than $24k and the minimum income is set at $150k. I could go on, but you probably still think it's all about confidence, don't you?

Look, I've been out there, I'm not a tall guy and I don't make big bucks. I'm fine with all of that and this isn't me whining, crying, or bellyaching. It's me stating the facts, I'm experiencing it, I'm living it. I've dated a few times, and they're actually are a few women who don't care about that stuff. But usually, there's a tradeoff... one woman I dated had all sorts of personal issues - she was addicted to prescription pills and was living with her parents because she was on permanent disability. Of course, when we met she told me that she worked from home and cared for her elderly parents. She would never get a second date if she mentioned that on the first date, or before, but it didn't matter to me. Finally, her lies and the drugs weren't worth the agony and mental anguish so I dumped her. Another woman I dated told me that she didn't have a car because she just moved here and was looking for work. Then after a couple of dates, I found out that she lost her license because of multiple DUI's. Three dates were enough for me, I was just a chauffeur to her.

I have noticed though, that minimum height and income are inversely proportional to her weight and the number of kids she has. A woman who is 60 pounds overweight with 3 kids will date a short skinny guy living with his mom.

"Try to be like the turtle: at ease in your own shell."
— Bill Copeland