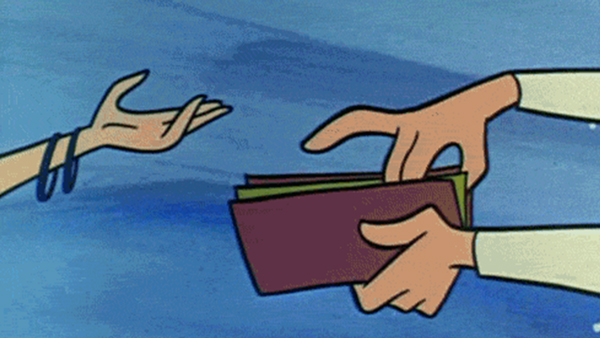 "All women want is money!!" Have you ever heard this nonsense? Well I have and the men who say this usually only date a certain spectrum of women ie material minded 'Gold Diggers'. In order for a woman to want money she had to pick this idea up from somewhere or somebody.

Every see a movie called The Notebook?

If you haven't it's sort of a chick flick/romance movie with Ryan Goslin and Rachelle Maddow. I won't spoil the plot for you but if you have some down time I would tell you to check it out because there's a specific scene in the movie that ties into several points I'm about to make in this article.

Ready to get into some technical financial stuff? Okay here goes, Let's start with this question, What is Money? Money is an idea, a store of wealth and a medium of exchange. This is why people with lots of it are thought to be successful but you might begin to think otherwise after reading this.

In case you don't follow politics or finance that's okay because when I first started out dating much of what I'm going to share with you was the furthest thing from my mind. All I knew how to do was work for it and spend it, usually as fast as I got it. You know those dollars in your wallet are called Federal Reserve Notes.

The hard work you do to earn a paycheck represents these dollars in the form of electronic digits that go into your bank account on payday(assuming you have direct deposit). Let's stop right there and jump to where people get their ideas about money.

I know this to be true for me and it could be true for you too. Numerous articles devoted to this subject have given insights about where people get their ideas. From the products they buy to the lifestyles they live. they are influenced by television shows and movies. They also get this from family members too. You see television and movies give us a lot of ideas about a lot of things including money. Money is a noun and a noun is a person, place or thing. Since money is not a person or place that must mean it's a thing and a 'thing' is an object, making money a tool that we can use to acquire goods and services.

Now that you've been given insight into where people (including women) gather their ideas about money, lets turn our attention toward women and see how this applies.

Women watch television and movies don't they? Turn on today's television and take your pick between sitcom or reality television (which is a poor representation of reality). Shows like 'Real Housewives of...', 'The Bachelor', and many others plant ideas into the minds of viewers about money and other subjects. Why do so many women act like spoiled little princesses?

Does Disney animated movies like Cinderella play a role? It could. The television is actually mind control but this is a subject I'll devote an article or two to later, just wanted to throw it out there.

Now that you know this, isn't it sad that some women value money (which they've been conditioned to believe in since they were little)? Television shows give us characters to portray and have you ever noticed how success and money flow into the hands of taller men?

That's another idea women have had planted on them, on television they are given the idea that taller is better. Women will say stuff like "I want a taller man in case I wear heels." which sounds like nonsense until you discover this has something to do with biology and evolutionary factors. Taller men represent strength, security and authority.

Ever seen women on reality television fight over men shorter than say 5'10"? I rest my case.

I'll know things have changed when I see them begin to clamor over a man for his superior intellect and reasoning skills. This is not something I'm going to hold my breath for because this is one of those things that's right up there with flying pigs.

So let us go back to the title of this article "All Women Want Is Money!!" at first it appears that way but to understand that women have been conditioned to favor money sort of destroys this myth. Money's just an instrument to buy things and someone's purchasing power isn't an indicator of their intelligence, quality of character, or goodness.

Shouldn't those last three attributes be far more valuable than his height or money in the bank?

When you're out there dating keep this in mind because you're going to come across women from different backgrounds. Some will boldly state in their profiles that a man shouldn't even bother with her if he doesn't have X, or this or that.

This is a challenge meant to weed out those who don't fit the bill but don't let what she wants discourage you from finding happiness. Money doesn't determine the value of your character and never will but television, commercials and movies will continue to imprint viewers with this idea. As men we have to get clear on this type of stuff otherwise you run the risk of being angered over something trivial.

What Does Money Have To Do With Happiness?

If you think about the ability money has to buy things, does having more things equal happiness? This is a question for you to decide.

In case you said yes, hate to burst your bubble, it doesn't. I take the position that in order to live a happier life you don't need to have a lot of money or things. If you're going to have things, have the type of things that a developed character would have such as a sense of humor, intellect, the ability to feel empathy and more. The reason I say this is because money is not quintesential.

It's just a diversion in the hands of a man who hasn't developed himself. Money used as a cloak to make him appear attractive is a cheap trick because it works. They would only be gaming the system as it was proected. But wouldn't you want to be the man who is attractive for his inner qualities and abilities to make a woman feel special when she's in his presence?

I can't tell you what to want but I can make a suggestion by sharing my idea's here with you. When I started to learn about money, it's importance to people (not just women) and why they valued it, some things became ultraclear in my mind. As I began to date women I learned that they don't really care about your money, only certain ones do because they understand what your money can do for them. Notice I said 'for them' because if you have it, you might confuse as many men do, that all a woman is interested in is your money when in reality she's interested because you have something she wants.

Now that you know where people get some of their ideas from, you can use this information to check where a woman's mind is at. If her mind's not in the right place, do yourself a favor and cut her loose. By doing this you save yourself frustration and headache later on.

Not all women are about the money and if you look, you will find them. The choice is yours!

What are you thoughts on this idea of women just wanting a man's money?